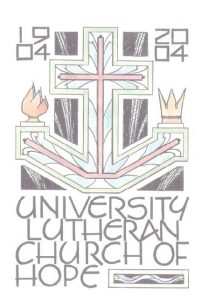 or a comprehensive history of our first 100 years, take a look at our history book.

A brief history of University Lutheran Church of Hope

The University Lutheran Church of Hope was founded in 1904 upon the recommendation of a group of local women of Norwegian descent. This group of tenacious women believed it imperative that there be a Norwegian Lutheran Church in the Southeast neighborhood of Minneapolis that could serve the quickly growing University of Minnesota student population. They formed a Ladies Aid (St. Markus Kvindeforening in Norwegian), and after some deliberation, a group men signed the Articles of Incorporation on 1904 (women were not yet able to constitutions). The congregation was originally called Hope Evangelical Lutheran Church, but the name was later changed to reflect its ministry to college students.

n firm ground for congregation, celebrating its past and preparing it for another 100 years of service to the gospel. cieoecono  Rev. Reque served as the first pastor of the fledgling and building-less congregation, but resigned after six months, fearing the congregation would not survive. Rev. Olaf Brandt, a professor from Luther Seminary took charge. The basement of the church was completed and the cornerstone was laid Nov. 22, 1908. Through a constant and tireless effort, he kept ULCH afloat, raising $24,244 for the construction of a building, which was in rudimentarily working order by his departure in 1910.

The next pastor to lead ULCH was C. S. Thorpe. According to history, when Rev. Thorpe began in 1911, there were only 102 members and the church’s income was $749. Upon his retirement 37 years later, membership had grown to over 900 members. During his career at ULCH, Rev. Thorpe led the expansion of the church sanctuary (the one standing today), which was completed in 1927. Already $70,000 in debt from the expanded sanctuary, the Great Depression hit the congregation hard. This debt seemed impossible to manage, but the same spirit that saw people through the difficult beginnings of the congregation spurred the congregation on, and the debt was paid in full by 1948.

The 1950s were a vibrant time for ULCH. The Parish Center, which serves now as the education wing wherein PEASE Academy resides and includes Thorpe Chapel, was completed in 1956 under the direction of Rev. Arndt Halvorsen. Rev. Thorpe and his successor, Joseph Knutson, also had a hand in the creation of that facility. In addition, ULCH’s choir developed considerably in the 1950s. Music has always been an important part of this congregation’s history and culture. The congregation’s first choir was formed in 1910 and a pipe organ was installed in 1916. That organ was later replaced by the Holtkamp pipe organ you see today. By the 1950s, ULCH’s choir had expanded to include a youth choir, a high school choir, and a senior choir.

ULCH has had a history of notable pastors. Reverend Halvorson (pastor 1951-57) was known for his preaching and presided over the congregation in a time of unprecedented growth, both in the size of the facility and the congregation. His tenure as pastor was followed by the service of Rev. David Preus (p. 1957-72), who later went on to become President of the American Lutheran Church. Rev. Preus, who participated in the Civil Rights movement, helped to focus the congregation on its local neighborhood. Preus was integral in fostering relationships between the congregation and the University. Following Vatican II, he also helped to foster a relationship with St. Lawrence Catholic Church next door. Preus also noted that ULCH’s willingness to discuss the difficult issues is what keeps it such a tight community.

Charles Mays was followed by Rev. Mark Hanson (p. 1988-95). During Hanson’s tenure, the congregation suffered a fire and also underwent a sanctuary remolding. He states that What he has taken with him from his experience at ULCH is how central worship is to the life of congregation; how a community of faith can engage challenging issues (such as homosexuality); and how to collaborate with and affirm strong leaders.

Rev. Hanson went on to become the Presiding Bishop of the ELCA, and was succeeded by Rev. Keith Olstad (p. 1997-2000) who oversaw the initiation of ULCH as a Reconciling in Christ Congregation. The congregation had been in conversation about homosexuality since as early as 1987, which the “Affirmation of Welcome” reflects. Rev. Craig Shirley came to the congregation in 2001. Shirley oversaw the 100th anniversary of the congregation, celebrating its past and setting it on firm ground for another 100 years of service to the gospel.

In 2015 the congregation underwent a series of staff changes. Rev. Shirley retired, along with the Director of Education, Diane Shallue. The Rev. Jen Nagel was called in 2015 by an eager and excited congregation looking to reignite its spirituality, youth education, and relationship with its community. Rev. Nagel is the first female and member of the LGBTQ+ community to serve as lead pastor of ULCH.

Check out these photos of the congregation from our building expansion in 1956!